The Week in Travel – 11th November 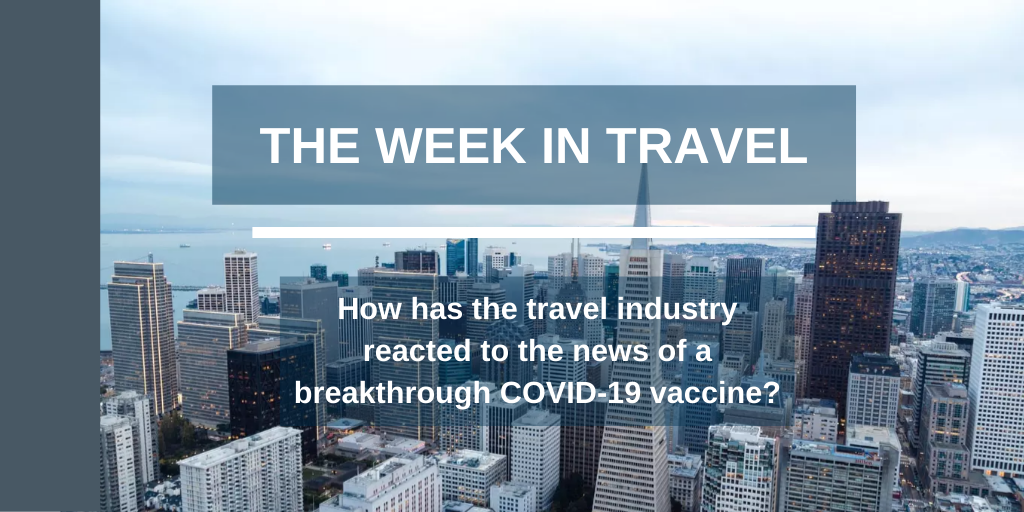 News of a breakthrough COVID-19 vaccine that is 90% effective against the virus was met with a collective cheer from travel industry groups this week.

The new vaccine, developed by US pharmaceutical company Pfizer, was seen by many as a giant step towards ending the global coronavirus pandemic. This positivity was reflected in the stock market, where shares in airlines rose for the first time in many months. EasyJet saw its shares rise 30%, Ryanair’s stock jumped 16%, while British Airways owner IAG’s share price increased by 38%. Across Asia, major airline groups including ANA Holdings (18%), Singapore Airlines (13%) and Japan Airlines (21%) experienced similar gains.

In further encouraging news for the travel industry, a new survey revealed nearly 20% of global consumers think it is safe to travel now, despite ongoing complications caused by COVID-19. As reported by International Airport Review, the study by business consultants Oliver Wyman also highlighted shifts in passenger behaviour since May 2020. It found 63% of respondents expect to travel for leisure at the same rate or more post-pandemic. However, 43% of business travellers said they planned to travel less in the future.

Elsewhere, the eagerly anticipated Singapore-Hong Kong travel bubble will now start on 22nd November. The scheme will initially offer one flight per day between the two countries for up to 200 passengers, increasing to two daily flights from 7th December.

In the US, United Airlines has revealed it will return to John F. Kennedy International Airport for the first time in five years. The group said it will provide flights from New York to Los Angeles and San Francisco from early 2021, in order to meet new traveller trends emerging during the pandemic.

And finally, a group of lucky travellers were among the first to try out Virgin’s innovative Hyperloop technology this week. The ‘high-speed levitating pod system’ transported passengers through vacuum tubes at speeds of up to 107mph at a test site in Las Vegas. Virgin Hyperloop is capable of reaching speeds of over 600mph – meaning a trip between New York and Washington could take as little as 30 minutes in the not-too-distant future.