The Week in Travel – 23rd April 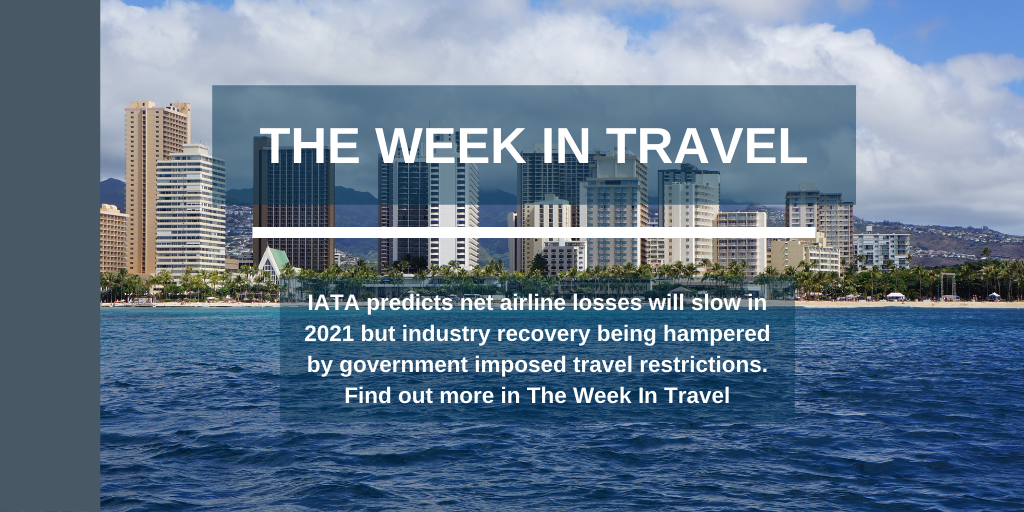 Net airline industry losses are expected to hit $47.7bn in 2021, an improvement on the estimated net industry loss of $126.4bn in 2020, according to the latest forecast from the International Air Transport Association (IATA). The association said it expects the travel industry to start its recovery in the latter part of 2021, but added that government imposed travel restrictions “continue to dampen the strong underlying demand for international travel”.

Willie Walsh, IATA Director General, said: “Despite an estimated 2.4 billion people travelling by air in 2021, airlines will burn through a further $81bn of cash.”

According to the Telegraph, the UK government is planning to provide official proof of vaccination for millions of British holidaymakers this summer. A government official told the Tourism Industry Emergency Response Group: “We aim to give people the ability to prove their vaccine status by the time international travel restarts where other countries require it.” The news came as Spain’s tourism minister, Fernando Valdes, told Sky News his country is “desperate” to get British tourists back this summer.

Meanwhile, France has become the first EU member state to begin trialling a digital travel certificate. The TousAntiCovid app will allow passengers to store COVID-19 test results on their smartphone, and will be piloted on Air France and Air Corsica flights to Ajaccio in Corsica.

Australia’s Deputy Prime Minister, Michael McCormack, revealed Singapore, Japan and South Korea are at the top of his list for the country’s next travel bubble, following the opening of quarantine-free travel between Australia and New Zealand. McCormack confirmed Australia is looking at opportunities to form new travel bubbles with countries that have a low risk of COVID-19 transmissions.

British Airways owner International Airlines Group (IAG) announced its intention to power 10% of its flights with sustainable aviation fuel by 2030. IAG said it plans to purchase one million tonnes of sustainable jet fuel a year, which will allow it to cut annual emissions by two million tonnes over the next nine years.

And finally, Istanbul Airport is aiming to make travelling more enjoyable for children and families with the launch of its ‘Now is the Time for Kids to Fly’ concept. The airport’s operator, Istanbul Grand Airport, has introduced a range of new services and activities under the initiative – including a nature concept playground with five themed areas for children to play in and special welcoming and farewell assistance for 0- to 6-year-olds.