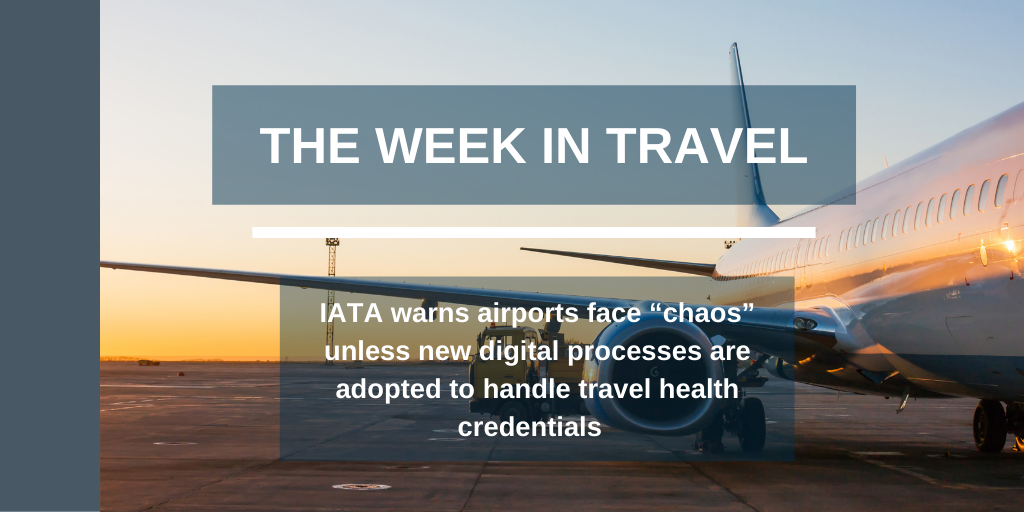 Data from IATA revealed airport processing times for passengers had grown from an average of 1.5 hours to 3 hours at peak times as a result of extra travel health credential checks - despite travel volumes only currently at around 30% of pre-COVID levels. It adds this could potentially grow to 8 hours per trip at 100% of pre-COVID traffic levels.

The news came as the UK Home Office revealed plans to “significantly increase the use of automation” in its border and immigration operations. The plans include the installation of ‘contactless corridors’ at airports by 2025, which will use facial recognition and biometric technology to speed up passenger checks.

Sticking to the UK, travel bosses from easyJet, Jet2, Tui, Loganair and Manchester Airports Group (MAG) have joined forces to demand the government expands the number of green list destinations to avoid the travel industry “being left behind”. EasyJet chief executive Johan Lundgren warned: “The UK industry can’t go through another ruined summer without grave consequences.”

The return of international travel will be “vital” for the recovery of the Caribbean economy, which suffered a staggering US$33.9bn loss in tourism business in 2020 as a result of the pandemic. Latest figures from the World Travel & Tourism Council shows the tourism sector’s contribution to the region’s GDP dropped 58% last year. However, WTTC senior vice president Virginia Messina believes the 680,000 tourism jobs lost across the Caribbean could return “if restrictions on travel are relaxed before the busy summer season”.

And finally, lucky Qantas passengers were able to get some of the best views of a rare ‘super blood moon’ as part of a one-off flight to nowhere. The 180 people aboard the Qantas B787 Dreamliner enjoyed an uninterrupted look at the astronomical event, which takes place when a supermoon and a total lunar eclipse occur at the same time.