The Week in Travel – 30th April 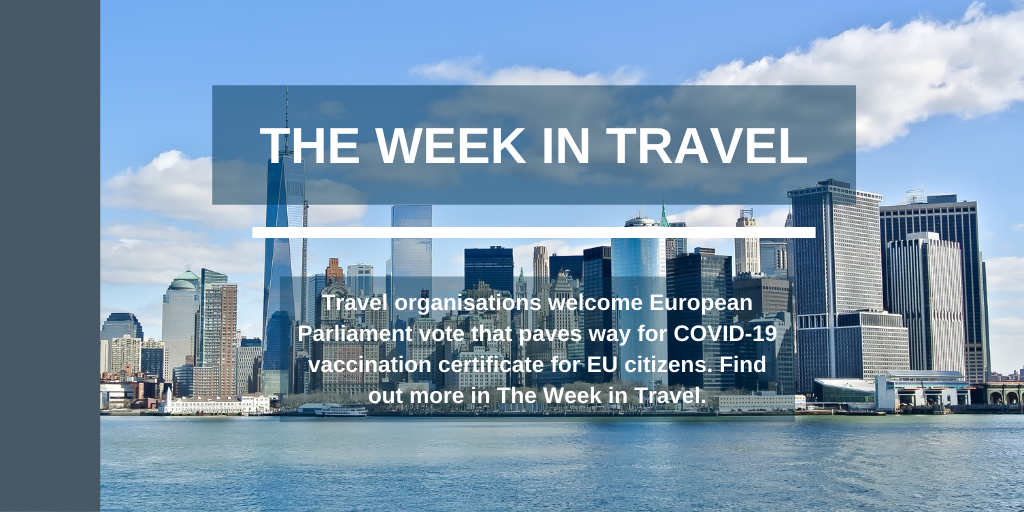 Aviation, travel and tourism sectors have warmly welcomed a European Parliament vote this week that will set final negotiations on the EU’s proposed Digital Green Certificate Regulation in motion.

MEPs have agreed to the plans on condition of a number of changes to the original proposal. This includes the Digital Green Certificate being renamed as the EU COVID-19 Certificate, travellers being provided ‘free and accessible testing’, and a promise of ‘full equality’ for vaccinated and tested citizens.

Travel organisations including the European Travel Retail Confederation (ETRC) and the International Air Transport Association (IATA) have now called for a ‘swift alignment’ between the European Parliament, European Commission and European Council to help restore free movement for EU citizens by summer.

Meanwhile, a new report from Airports Council International (ACI) highlights the dramatic shift in airport traffic during the COVID pandemic. ACI data found total passenger traffic dipped by 64.6% in 2020, while traffic at the world’s top 10 busiest airports dropped by 45.7%. With China being one of the first to see swift recovery in its domestic travel market, the country now accounts for seven of the world’s top 10 airports for passenger traffic according to ACI. Guangzhou Baiyun International Airport in China recorded the most passenger traffic in 2020, followed by Hartsfield-Jackson Atlanta International Airport in the US.

Singapore and Hong Kong have announced their intention to relaunch their Air Travel Bubble initiative on 26th May to allow for quarantine-free movement between the two countries. The original plans were scrapped last November following a rise in COVID infections in Hong Kong.

Lufthansa chief executive Carsten Spohr has predicted a bright future for the carrier despite sales across the group falling by 60% to €2.6bn in the first three months of the year. Spohr told investors: “Given the foreseeable major advances in vaccination rates, we expect demand to rise sharply from the summer onwards.” In other airline news, Ryanair has committed to powering 12.5% of its flights with sustainable aviation fuels by 2030.

And finally, London City Airport has become the first major international airport to control air traffic remotely. Flights are now being guided by a control tower located more than 70 miles away from the travel hub. The 50-metre tall tower, run by air traffic controller NATS, contains 16 high-definition cameras and sensors that give views of the runways and provide additional information such as radar and weather data.