The Week In Travel - 8th October 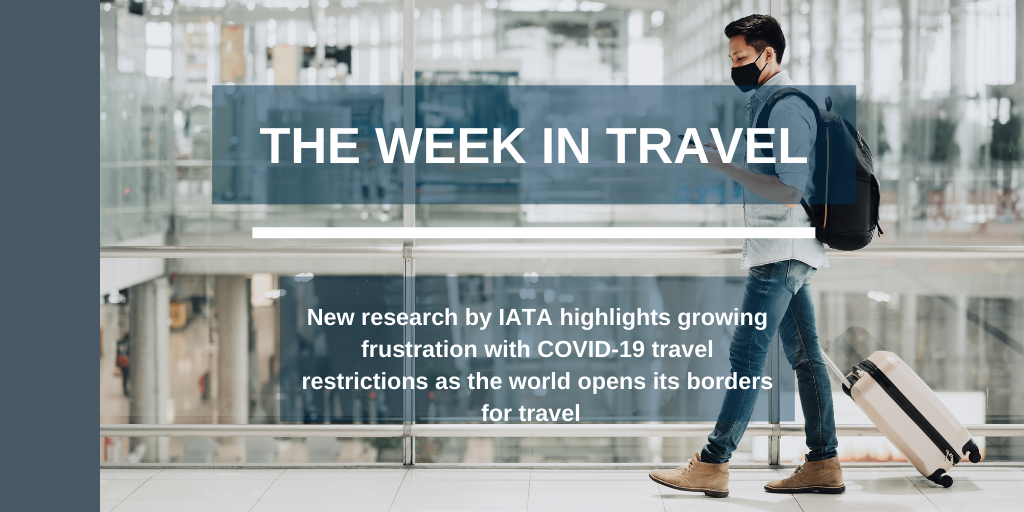 New research by the International Air Travel Association (IATA) highlights that many air travellers are increasingly frustrated with COVID-19 travel restrictions. The survey, fielded to 4,700 respondents across 11 key travel markets, demonstrates a strong shift in favour of more relaxed travel rules. While 64% of respondents believe current border restrictions are an unnecessary step for containing virus spread (up 11% from June), nearly three quarters of those surveyed feel that the restrictions have a detrimental effect on their quality of life. Evidently, the scales are tipping in favour of the desire to travel – a promising sign for industry recovery.

That’s not to say that travellers believe current measures should be scrapped entirely; rather, with global vaccination rates growing apace, many support the removal of quarantine rules and a greater emphasis on testing prior to travel. However, a question remains around the cost of COVID-19 antigen tests. Should the traveller bear the cost, or should governments pay in order to promote a faster return to travel?

In related news, British Airways has announced the return of daily services between London and Johannesburg from mid-December, as well as increased flights to countries including Mexico, Brazil and Argentina in time for Christmas. The news comes as the UK government slashes its red list countries from 54 to seven. Meanwhile, Singapore is set for a cautious reopen towards the end of the year, with the city-state’s government currently in negotiations with the U.S and several European countries.

In sustainable travel news, Google has launched a new feature for flight searches to display the estimated carbon emissions of a flight. As well as filtering flights by criteria such as price, duration and arrival time, prospective travellers can now prioritise their journey options by carbon impact.

And finally, Qantas has set a new company record for longest distance covered and longest time in the air. The repatriation flight from Buenos Aires to Darwin travelled a whopping 9,333 miles non-stop, with a flight time of 17 hours 25 minutes.